The Effect of Cleaning Glass with Soda 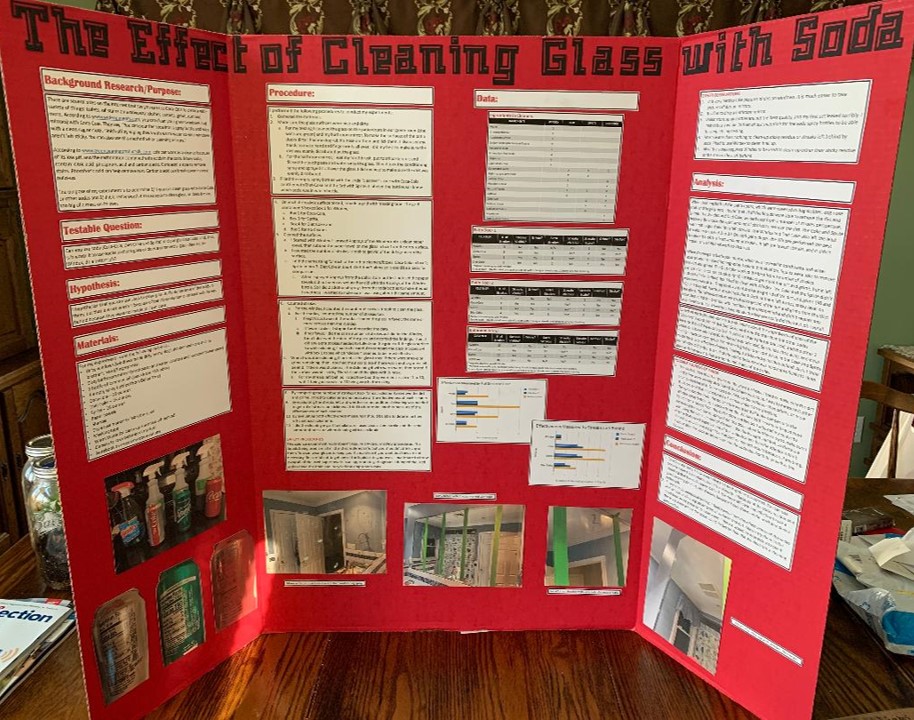 There are several sites on the internet that say you can use Coca-Cola to clean a wide variety of things: toilets, oil stains on a driveway, clothes, carpets, grout, rust and more. According to www.wideopeneats.com, you can clean your glass (windows and mirrors) with Coca-Cola. They say, â€œYou can pour the soda into a spray bottle and wipe with a clean rag or cloth. Finish off by wiping down with warm water so your windows arenâ€™t left sticky. You can also use this method when cleaning mirrors!â€

According to www.greencleaningproductsllc.com, cola can work as a cleaner because of its low pH, and the carbonation combined with acids in the soda. Many sodas contain: citric acid, phosphoric acid and carbonic acid. Citric acid is able to remove stains. Phosphoric acid can help remove rust. Carbonic acid can break down mineral build-up.

The purpose of my experiment is to determine 1) if you can clean glass with Coca-Cola or other sodas and 2) if it is really worth it to use soda to clean glass, or does it make too big of a mess on its own.

Can you use soda (Coca-Cola, Diet Coke and Sprite) to clean glass surfaces? And, if so, is it worth it to use sodas to clean glass or does a commercial glass cleaner, like Windex, do a better job?

When cleaning both of the patio doors, which were covered in dog slobber, dog nose stuff and fingerprints, I found that all of the liquids were able to remove the dirt and grime. The Windex and Diet Coke worked best from a number of strokes perspective, because they took the least amount of strokes to remove the dirt. The Coke and Sprite were not as good and they left streaks. The Windex and Diet Coke also left the least streaks on a scale of 1 to 10. On both patio doors, the Windex performed the best because it took the least amount of strokes, it left the fewest streaks, and it didnâ€™t require any additional work to clean-up.

Based on my tests, and some research online about the ingredients of each of the â€œcleanersâ€ I used, I think the Diet Coke performed better than the other sodas because it has 2 types of acids in it: citric acid and phosphoric acid, and the other 2 sodas only have one type (Coke has phosphoric acid, Sprite has citric acid); and it has no high fructose corn syrup. I think the high fructose corn syrup in the Coke and Sprite made them less effective cleaners, leaving a sticky messy residue behind. Also, I think the Windex out performed all of the sodas because it was made specifically to clean glass with ingredients that are not found in any of the sodas.


The distribution of dirt or grime on the glass surfaces. I tried to make sure the dirt and grime were evenly distributed, but there was no real way to measure it other than by looking at it. Some spots could have been thicker than others, or more stuck on, and that might have had a small impact on my testing.
The spray bottles from the dollar store were kind of junky compared to the Windex spray bottle. Four sprays from the Windex bottle seemed to give more liquid than 4 sprays from the dollar store bottles. So, I adjusted my sprays by increasing the number of sprays from the dollar store bottles to try to make sure I was using the same amount of cleaner. I did this by sight and feel, so there is a chance that I used slightly more of the soda cleaners than the Windex. I donâ€™t think this would have a significant impact on my test results because, if anything, it would give the soda an advantage and the soda still didnâ€™t do as well as the Windex.

Based on my tests, I have concluded that my hypothesis is correct. You can use soda to clean glass surfaces, but it is not worth it because of the sticky residue and streaking that the soda leaves behind. It is more efficient and effective to use a glass cleaning product, like Windex, because it cuts down on the work and does a better job.

If I were to do additional testing, I think I would test the effectiveness of the sodas and Windex in cleaning other types of surfaces and dirt. Maybe try them in the toilet bowl or on grout or to clean coins. I think it would be interesting to see if there are areas where the sodas could do better than the Windex from a cleaning perspective.

For my experiment I used the following materials:

I performed the following procedures to conduct my experiments:

This science experiment really doesn’t require any special safety procedures. The liquids being used are all mild and considered safe, but you shouldn’t drink any of them. You can wear gloves to keep your hands clean if you want, but they are not necessary. Be careful not to get any of the liquids into your eyes. I made sure to throw away all of the used paper towels in an appropriate garbage can. I dumped the used sodas down the drain and  recycled the empty soda cans.