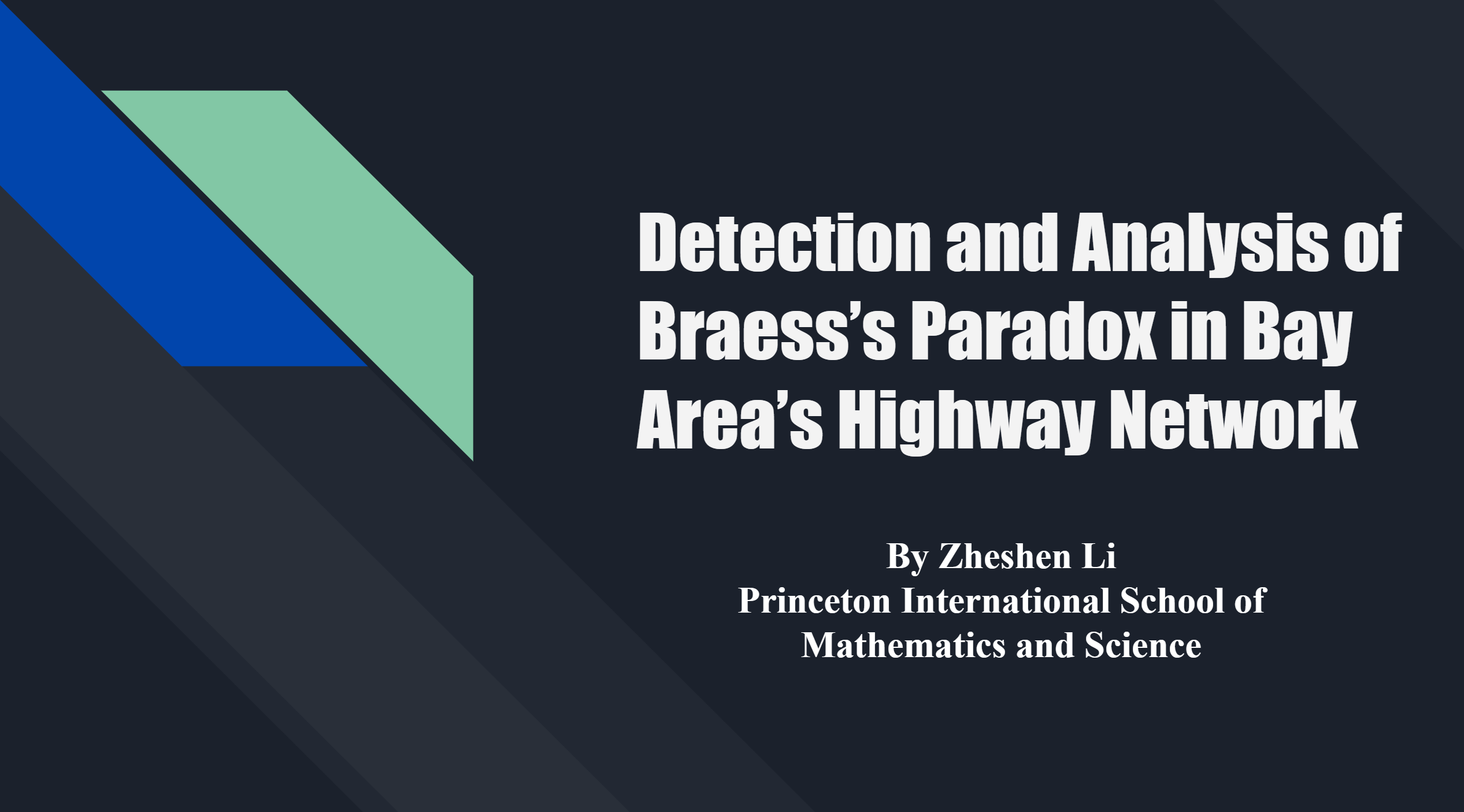 This research aims to detect the occurrence of Braess’s Paradox in the Bay Area’s highway network. To do so, we set up linear equations to model the time each traveler takes to travel through each of the 12 highway segments between San Jose and San Francisco. Then we solved equations to find out the equilibrium traffic situation that all routes take travelers the same amount of time. We compared the time that travelers use in equilibrium situations with or without the closure of San Mateo Bridge and Dumbarton bridge, two bridges that could potentially cause the occurrence of the paradox. We found out that there are no occurrences of Braess’s Paradox in this part of the Bay Area highway network under the tested traffic.

In this project, I will model the highway network of the Bay Area, and set up linear equations to model the time each traveler takes to travel on each highway segment. There are five routes via major highways that travelers can take to go from San Jose to San Francisco without taking detours. We observe that the shape of the network somehow resembles the basic Braes’s Paradox model. Thus, we will determine if the two major bridges in the middle, San Mateo - Hayward Bridge (CA - 92) and Dumbarton Bridge (CA - 84), are the “shortcuts” that cause the Braess’s Paradox. I will compare the modeled equilibrium traffic flow before and after San Mateo Bridge or Dumbarton Bridge was closed. If the travel time of drivers decreased after the closure, it suggests a likely occurrence of the paradox.

The goal deals with the problem of traffic, which is something we experience rather often. San Francisco Bay Area is also one of America's most congested areas. Thus the traffic problem there is worth exploring. The major objective of the project is to detect and analyze the occurrence of Braess's Paradox in the traffic network of Bay Area. My plan, in brief, is to model the network and the impact of the closure of two bridges in the area. From the results of the equations, I can determine the occurrence of Braess's Paradox in the highway network.

I am trying to detect a problem and solve it if it's detected.

I worked on it on my own. I had to first measure the length of highway segments I want to model via google map and search the speed limit of them to determine Ax in my model. I also searched multiple places to find the average actual traffic flow of certain bridges to determine Bx in my model. Then I did some hand calculations to determine the exact value of Ax and Bx for all 12 highway segments. When solving the traffic flow under equilibrium situation, I listed the equations and got a 12-variables equation and some 9-variables equations, which were extremely difficult to solve by hand, with lots of decimals. Thus, I learned some Mathematica basics and solved them with Mathematica. Finally, I plugged the results into forms and made a chart.

This type of network modeling and finding equilibrium situations as a whole is new to me. I have done this type of modeling before.

There are totally 12 connections in my model, much more than the 5 in some reference papers.

I found that previous researchers on Braess's Paradox in cities focused mainly on downtown road networks. In my research, I turned toward intercity highway networks, which were of a larger scale.

The equations I had to solve for determining the traffic flow under equilibrium situation have 12 and 9 variables, which makes them difficult to solve.

I learned Wolfram language basics and solved the 12-variable and 9-variable equations in Wolfram Mathematica.

If I had more time, I would model the delay parameters of the roads more detailedly, probably take carpool lanes and express lanes into consideration, as they're widely seen in CA highways.

After working on this project, I had the idea of modeling the traffic network of other cities/regions worldwide to determine Braess's Paradox's occurrences in those regions and give potential solutions to help with the traffic.

COVID - 19 did not affect the completion of my project.