The Effect of Balloon Type on Helium Diffusion 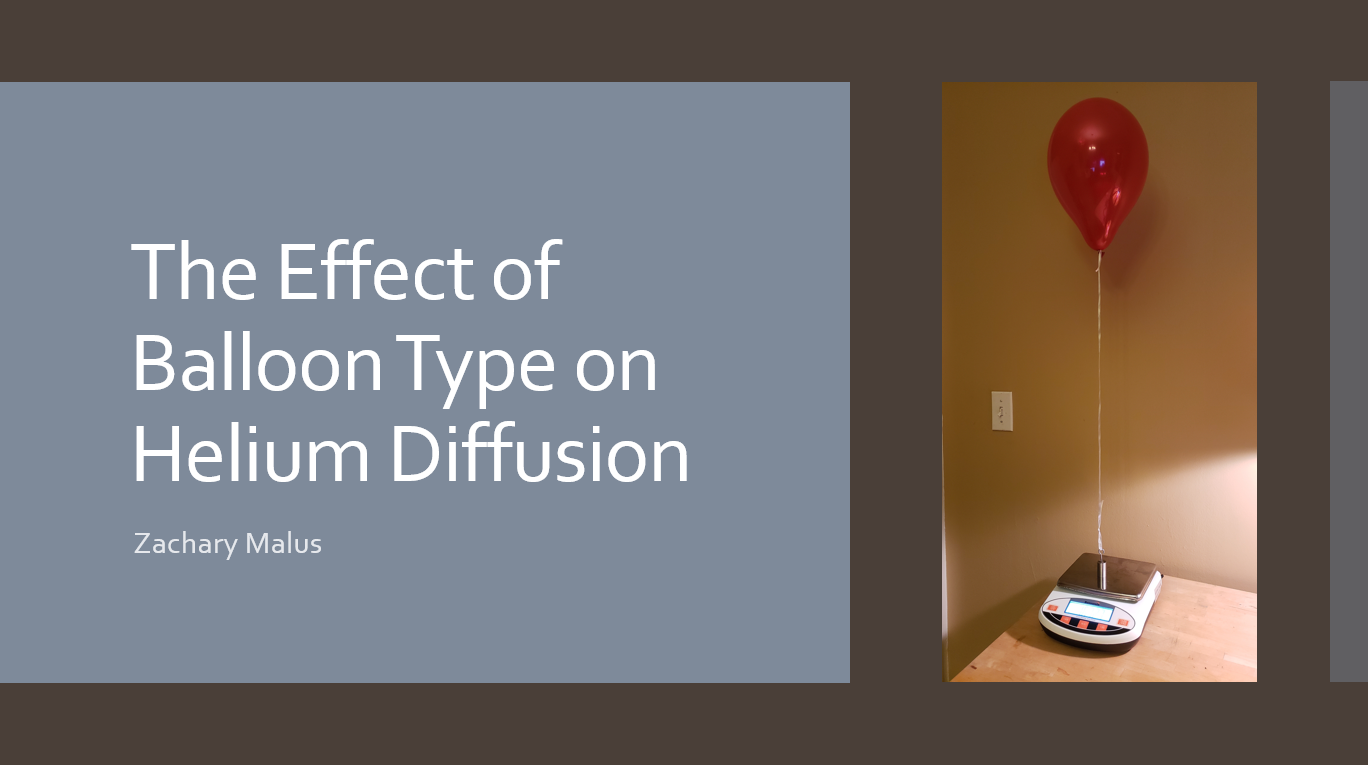 The purpose of the experiment was to determine if different types of balloons affected the rate of diffusion of the helium through the balloon's surface. The hypothesis was that if different types of balloons are used, and/or hairspray is applied to the surface of the balloon to create a barrier, then the rate of diffusion will differ. The constants were the altitude of the balloon, the scale, and the ribbon, and the control group was regular latex balloons. The independent variable was the balloon type, and the dependent variable was the rate of the helium's diffusion. The dependent variable was measured by taking three readings on a scale to measure the upwards force that the helium exerted on the balloon at set intervals over the lifetime of the balloon, averaging them, and mapping the average reading onto a graph. The results of the experiment were that the rate of helium diffusion did differ based on balloon type and/or if hairspray was applied, thus the hypothesis was accepted. If I were to redo the experiment in the future, I would attempt to figure out a way to automate the scale readings to be taken at set intervals without human intervention.

Photos of balloons taken by student

3 Metallic Latex Hi Party Balloons (In this experiment, 8 were used to test a theory about the relation between balloon weight and decay rate, however it proved to be false)

Laboratory Balance with Precision of At Least 0.01 Grams.

In order to perform the experiment:

Cut a ribbon so that it is approximately 0.5 meters long.

Mass the ribbon and an individual balloon, as well as an anchor/weight to be used.

Fill the balloon with helium (make sure not to overfill).

Tie one end of the ribbon to the balloon and the other to the anchor/weight.

Place the anchor/weight on the scale and record the mass; this will be hour zero.

Record the mass of the balloon, ribbon and anchor/weight on set intervals.

Repeat step 6 until the balloon is no longer afloat.

Repeat steps 1-7 for each balloon.

To analyze the data, it was put into Excel and graphed. Using these graphs, we could determine the slope/rate of decay, as well as the type of decay (exponential vs. linear). Latex can cause allergic reactions, so it is best to check if it effects you before continuing with the experiment.

Photos of balloons taken by student

No; I had the same goal throughout the entire experiment.

I was trying to test a hypothesis (if different types of balloons are used, and/or hairspray is applied, then the rate of helium diffusion will differ) and resolve it.

In order to complete the project, I had to take multiple readings every hour or so each day for around 2 months, for a total of roughly 1200 individual readings, requiring roughly 10 seconds per reading.

This was a solo project.

After searching for similar experiments, it seems to be that this experiment has never been attempted before. The approach in measuring the upwards force of helium inside a helium balloon over time using a scientific scale was a new idea.

The use of tools to determine the equation of the best fit line, including exponential curves, was new.

The project was based off an original idea, and thus was different from anything I have seen.

Exhaustive research was done on various sites and search engines, and no such experiment has been documented.

The most challenging aspect of the project was the time commitment involved, as well as some of the mathematics involved which had not yet been covered in math class.

The original plan was to leave the balloon on the scale and watch the readings over time. However, a flaw in this plan was that the scale's 0 point would drift over time. This problem was found when using calibration weights to verify readings. To solve this problem, I contacted the scale manufacturer, who advised me to reboot the scale between readings. I verified that this solved the problem by, once again, using calibration weights.

I learnt that small differences over time add up to form signifigant inaccuracies.

I would attempt to figure out a way to automate scale readings by finding a scale that could interface to a computer.

Yes; if I were to complete another project involving balloons, it would be attempting to find the ideal amount of hairspray in grams to coat a balloon with in order to maximize its lifetime. The experiment found that while hairspray reduced diffusion, its added weight more than offset the benefit of the reduced diffusion. A hypothesis would be that there is an ideal amount of hairspray that would have the highest net benefit.

Covid-19 made my project much easier to accomplish thanks to remote classes, which gave me the oppurtunity to take frequent measurements.