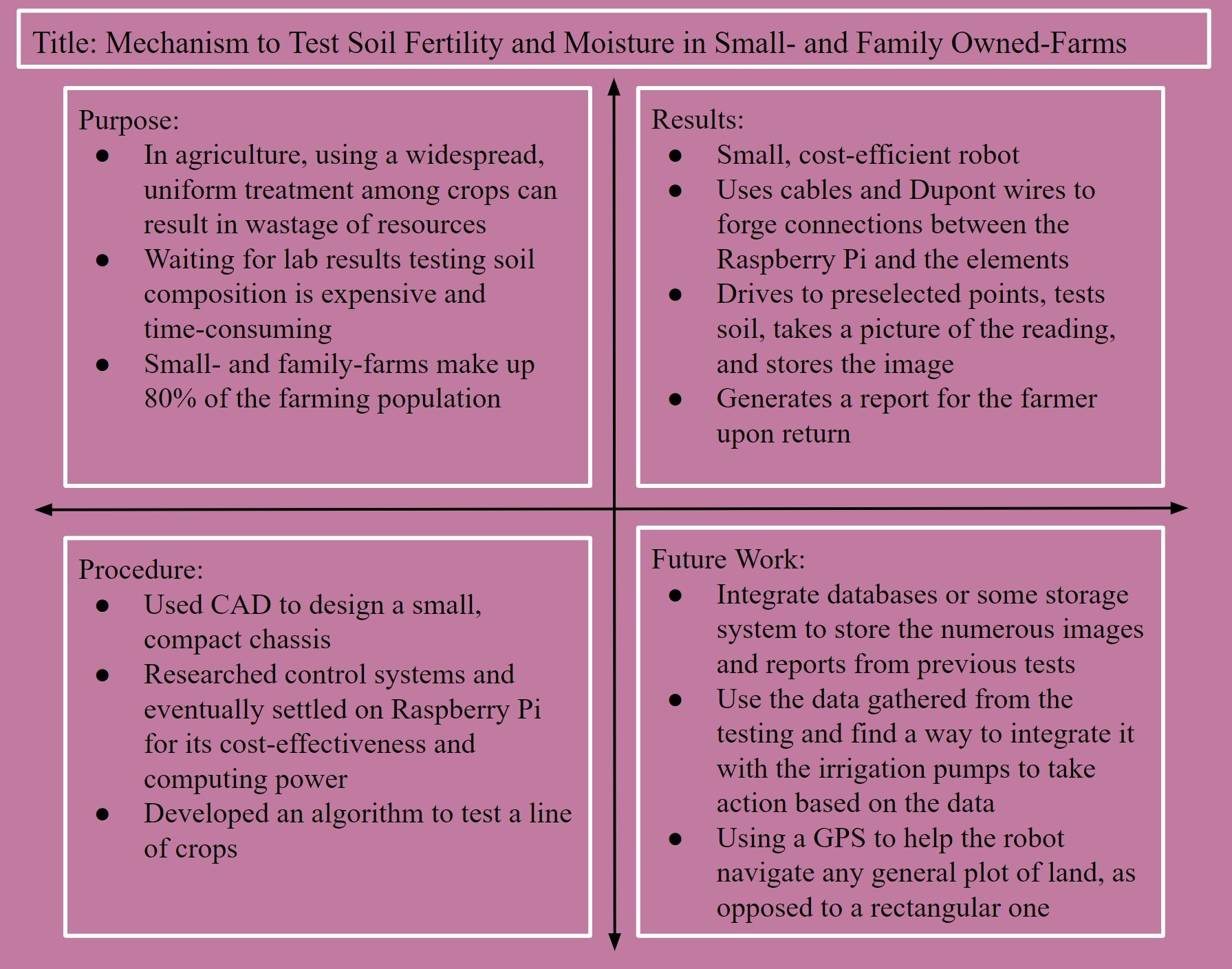 A. Question or Problem being addressed (Rationale)

In agriculture, many farmers use the same treatment (for example watering or fertilizing) for large areas of crops, which may consist of several acres. This results in the overuse of water and resources like fertilizer, neither of which are very cheap. In addition, nitrogen runoff caused by excess fertilizer raises the possibility of water poisoning. Even for the farmers who check each section of their fields and administer resources accordingly, the task is extremely tedious and repetitive, taking several hours or days. They need to take samples of each section, send them to a lab, wait for an analysis, and take the appropriate measures. In addition, sending it to a lab costs farmers as much as $600 every season. While several innovative techniques are being explored including the use of robotics and drones, the mechanisms are quite large and expensive. Small- and medium- sized farmers, who make up about 80% (USDA) of the farming population and 50% of the industry, cannot afford to use these solutions; they are simply not designed for their category of farms. Hence, this project aims to do the following:

C. Description in detail of method or procedures

The main objective of the project was to design a mechanism capable of testing a farming field for moisture and fertility levels. The plan was to build a robot that would be able to travel a distance, use a sensor, and report the data back to the farmer. The goal was a result of a problem I encountered while discussing farming techniques with a local farmer. I learned that many modern solutions that address the issue of the wasting of resources are only really applicable to large-scale farms. Thus, I attempted to solve a problem by creating a cost-efficient and portable solution for smaller farmers.

For this project, I had to CAD, plan out, build, and program my robot. A major task was determining which control system to use and learning how to use it, as I was not knowledgeable in Raspberry Pi prior to this project.

What separates my solution from others that also address resource wastage is that mine is targeted at small farmers. According to a report by the USDA, small farmers make up 80% of the farming population and 50% of the industry's generated revenue. With this in mind, a solution that would apply to them would have a large impact.

The most challenging part of the project was likely the control system and the programming aspects. Having never worked with Raspberry Pi before and having a rudimentary knowledge of Python, I had to learn many skills for the first time while doing my project, such as how to make a motor spin a quarter-rotation using a Python command. Another challenging part was determining a method to take a reading of the soil, since the sampling arm often touched the ground at an angle. After numerous attempts, I was able to learn both skills. From overcoming these problems, I learned about how to use Python with robotics as well as how to use the parts at my disposal to craft a solution to a specific problem.

I would likely work on using a GPS or some other navigation device to give the robot more functionality in determining a path to take to test all the inputted points.

There are multiple things I would wish to add to this project, such as a GPS system for navigation, a way to interface with large irrigation pumps to make use of the data collected with the robot, and a database to store data for numerous tests, something not feasible as the program is. I would also add separate sensors for Nitrogen, Phosphorus, and Potassium, since that would provide farmers with more data. Currently, the robot only gives a "fertility" value, which combines all three. With time, I would also make use of OpenCV or other visual programs that would allow the robot to become more functional.

The supply shortage during the COVID-19 pandemic caused a slight delay in obtaining the parts necessary for the robot, but it did not really hinder the progress of the project. In addition, I looked at alternatives, which helped me learn more as I progressed my project.