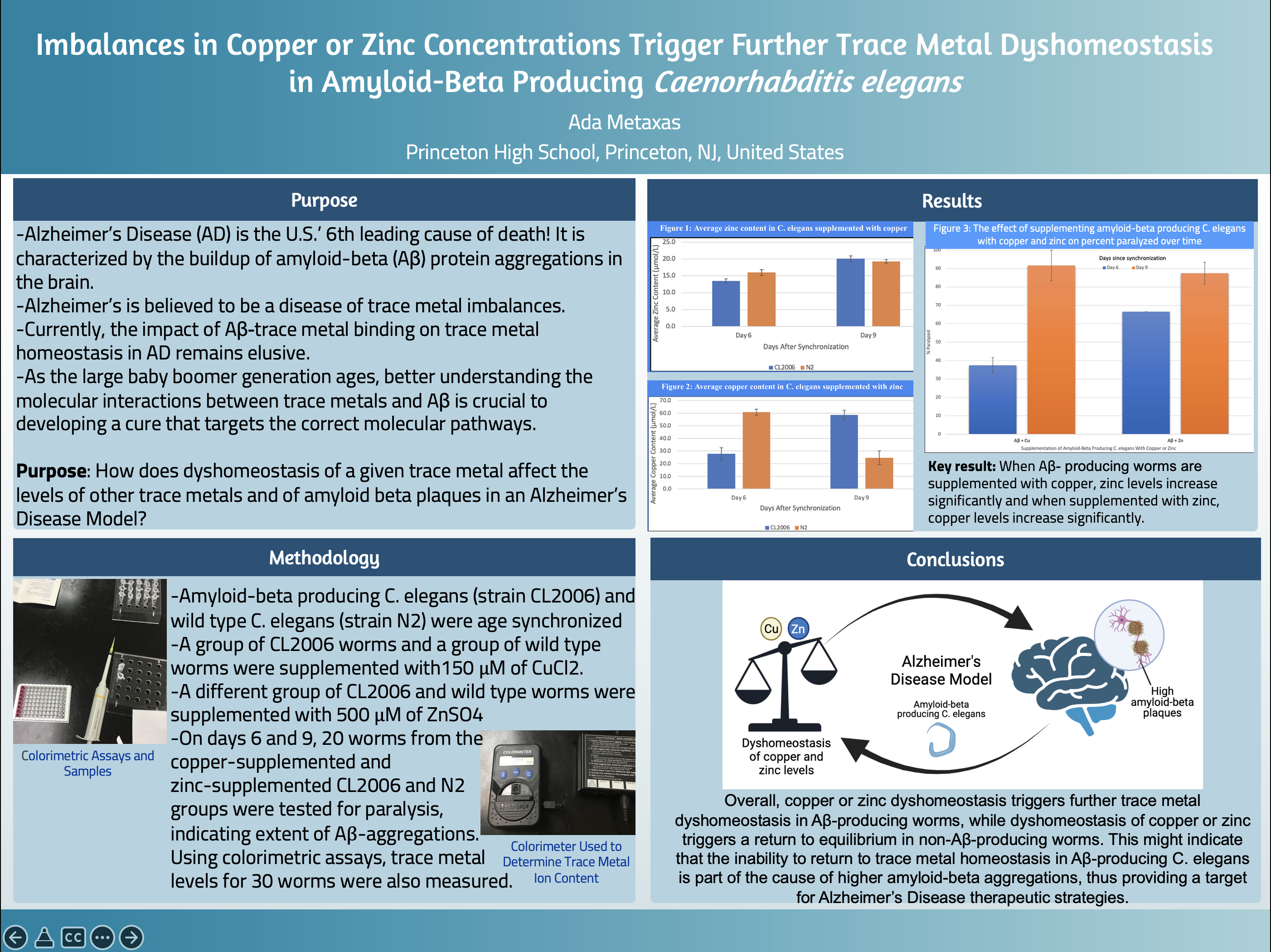 While the email sent by Mr. Wong on 3/4/22 indicates that we should not submit an abstract, the portal will not allow me to submit without this field filled out. Therefore, here is my abstract...

Alzheimer's Disease (AD), a progressive neurodegenerative disease characterized by the buildup of amyloid-beta (Aβ) plaques, is believed to be a disease of trace metal dyshomeostasis. Amyloid-beta is known to bind with high affinity to trace metals copper and zinc. This binding is believed to cause a conformational change in Aβ, transforming Aβ into a configuration more amenable to forming aggregations. Currently, the impact of Aβ-trace metal binding on trace metal homeostasis and the role of trace metals copper and zinc as deleterious or beneficial in AD remain elusive. Given that Alzheimer's Disease is the sixth leading cause of adult death in the U.S., elucidating the molecular interactions that characterize Alzheimer's Disease pathogenesis will allow for better treatment options. To that end, the model organism C. elegans is used in this study. C. elegans, a transparent nematode whose connectome has been fully established, is an amenable model to study AD phenomena using a multi-layered, interconnected approach. Aβ-producing and non-Aβ-producing C. elegans were individually supplemented with copper and zinc. On day 6 and day 9 after synchronization, the percent of worms paralyzed, concentration of copper, and concentration of zinc were measured in both groups of worms. This study demonstrates that dyshomeostasis of trace metals copper or zinc triggers further trace metal dyshomeostasis in Aβ-producing worms, while dyshomeostasis of copper or zinc triggers a return to equilibrium in non-Aβ-producing worms. This supports the characterization of Alzheimer's Disease as a disease of trace metal dyshomeostasis. This might indicate that the inability to return to trace metal homeostasis in Aβ-producing C. elegans is part of the cause of higher amyloid-beta aggregations.

Citations related to my procedure are below

2) Alexander, Adanna G et al. “Use of Caenorhabditis elegans as a model to study Alzheimer's disease

overexpression of the HSP-16.2 small chaperone protein.” The Journal of biological

production and clearance.” Proceedings of the National Academy of Sciences of the United States

Supplementation with Copper and Zinc

*Begin supplementation, once the worms reach adulthood, stage L4 to ensure the treatments do not affect development

The following potentially hazardous materials were used: 1)150 μM CuCl2 (NFPA Rating: (estimated) Health: 2; Flammability: 0; Instability: 1), and 2)500 μM ZnSO4 (NFPA Rating: (estimated) Health: 2; Flammability: 0; Instability: 0). The above materials can cause eye, skin, gastrointestinal, and respiratory tract irritation if they are inhaled, ingested, or come in contact with skin or eyes. Due to the potential safety risks associated, several safety precautions will be taken. To avoid inhalation, the experiment will be conducted in a well ventilated area with a hood. To avoid skin or eye irritation the researcher will use gloves, a lab coat, and goggles and conduct the experiment in a facility equipped with an eyewash facility and safety shower for emergencies. Any excess materials will be disposed of at a chemical waste disposal center at my high school. This experiment can safely be run with the appropriate safety precautions under a mentor supervision, considering the NFPA ratings are low.

For more information please refer to the following msds sheets:

I first became interested in conducting neuroscience related research when an extended family member, with whom I am close, suffered a mental health challenge. This was a very difficult time for my family as we tried to get the appropriate treatment and adjust to the new reality.

Thus, I was determined to conduct neuroscience research when I was accepted to my high school’s 3 year research program, which accepts the top 5% of students, as a sophomore in September 2019. After reading dozens of publications to better understand current research in the neuroscience field, I came across a super interesting publication that found high trace metal levels in amyloid-beta plaques: the primary biomarker in Alzheimer's Disease.

This really piqued my interest because I had recently made a facebook advocacy page about the importance of water safety after hearing about the Flint, Michigan water crisis in which toxic trace metals were leaked into drinking water. I had become very passionate about making sure that the water we were drinking was safe and free of toxic trace metals. So, the publication greatly piqued my interest because it made a connection between high trace metals and the development of the neurodegenerative disease Alzheimer's.

After developing my research procedure, I initiated conversations with faculty from surrounding universities to make sure my procedure was as comprehensive as possible. Dr. Rachel Kaletsky (Princeton University, molecular biology) provided me with the lysis procedure for dauer C. elegans, as I mention in the acknowledgements section of my manuscript.

Since I would be conducting experimentation in my high school’s rudimentary science lab, I needed to independently purchase several pieces of equipment. Overall, I needed $2,250 worth of materials! Therefore, I spent four months (September- December 2020) fundraising on the research crowdfunding website experiment.com: https://experiment.com/tracemetalsalzheimers. After raising the full sum, I spent every free moment between classes and during lunch speaking with material manufacturers to ensure the materials would fit in my school’s rudimentary lab and arrive promptly despite the pandemic induced shipping delays. Finally, I began experimentation while persevering through Covid-19 school closure challenges and covid-induced supply chain delays (which I detail further in questions 4 and 7).

I conducted experimentation and recorded data independently from March to June 2021. Overall, gathering data required being adaptive and a great deal of dedication. I spent at least 2 hours in the lab 4 times per week to conduct experimentation, with some days becoming 5 hour long lab days. Given that I am also a track and field athlete and captain of the team, balancing both long days in the lab and track practice was challenging but ultimately successful. Overall, I was so passionate about conducting my research that I was happy to spend long hours in the lab.

After finishing experimentation, I spent summer 2021 statistically analyzing the raw data, formulating conclusions, and reading dozens more previously-published papers to fully pinpoint the unique contributions of my research. Overall, my study newly demonstrates that dyshomeostasis of trace metals copper or zinc triggers further trace metal dyshomeostasis in Aβ-producing worms, while dyshomeostasis of copper or zinc triggers a return to equilibrium in non-Aβ-producing worms. This might indicate that the inability to return to trace metal homeostasis in Aβ-producing C. elegans is part of the cause of higher amyloid-beta aggregations.

I submitted my full research paper to Frontiers in Neuroscience: the most cited, international neuroscience journal. After several rounds of blind peer-review, my paper was accepted and published in October 2021 (https://www.frontiersin.org/articles/10.3389/fnins.2021.755475/full).

As the 6th leading cause of U.S. deaths, Alzheimer's Disease is a life threatening illness that affects over 44 million people worldwide. It is very hard seeing loved ones' memories slowly slipping away. My research brings us one step closer to finding a cure.

The model organism C. elegans, used in my research, is an excellent in vivo model for the study of Alzheimer's Disease and roughly 38% of worm genes have a human ortholog, such as APP and tau which are largely involved in Alzheimer’s Disease. Given that many biochemical pathways are conserved in C. elegans, my study reveals key insights about the molecular mechanisms between trace metals and amyloid-beta present in Alzheimer’s Disease.

As the large baby boomer generation continues to age, better understanding the molecular mechanisms characterizing Alzheimer’s Disease, particularly as a disease of trace metal dyshomeostasis, is key in helping develop a cure that targets the correct molecular pathways.

Additionally, balancing my responsibilities as track and field captain with long lab days was challenging. As a National level qualifying track athlete, I am expected to be at practice every day and at multiple hour-long meets which are often on weekdays. Given that I needed to stay after school to finish lab experimentation, it was often a challenge to finish the trials in time before practice started. Overall, by maintaining focus and preparing any materials ahead of time whenever possible, I was able to successfully balance both experimentation in the lab and track athlete responsibilities.

Also, I had several pandemic induced challenges that I creatively overcame, which I detail in question 7.

Overall, my research journey has been an invaluable experience. To overcome procedural and material-constraint-related challenges, I have further developed my problem solving skills and perseverance. I have also practiced reading scientific literature to find methods proposed by other scientists in the field. By initiating conversations about my procedure with several university professors, I learned the power of networking and collaborating with other scientists. To fundraise a large sum of money to support my experimentation, I practiced using persistence and outreach methods. Finally, I further developed my analytical skills while analyzing data and formulating conclusions.

Amyloid-beta and trace metals copper and zinc interact with high affinity and this binding is believed to cause a conformational change in the shape of amyloid-beta, transforming it into a configuration more amenable to forming aggregations. My study indicates that an imbalance in a given trace metal causes a cascading effect resulting in further trace metal imbalances and more amyloid-beta aggregations. Therefore, I am interested in exploring the mediating factors that allow the interaction between trace metals and amyloid-beta in an Alzheimer’s Disease model.

HSP-16.2 is an oxidative stress response chaperone protein. As a chaperone protein, HSP-16.2 facilitates normal folding of proteins and handles misfolded and aggregated proteins. Thus, I would be interested in exploring the levels of protein HSP-16.2 as amyloid-beta aggregations increase in response to trace metal imbalances.

Throughout my 2.5 year long research journey, dealing with the Covid-19 pandemic has been challenging. Firstly, the scientific crowdfunding website experiment.com was severely behind schedule at approving projects due to delays imposed by Covid-19. It took over 2 months of sending emails to inquire about the delays and find ways to speed up the process to simply receive approval for my project to be listed on the site. Later, when ordering materials, shipping and manufacturing were greatly delayed due to the pandemic. I had several phone calls with manufacturers to find products that would arrive in the shortest possible time and that would fit in my school’s rudimentary science lab. In addition, my school had decreased class time to minimize the time in school during the pandemic. I simply would not have been able to finish my experimentation with such limited in-person class time. Therefore, I stayed after school to conduct experimentation, spending 2 hours in the lab between the end of the school day and the start of my track practice. Overall, I have used perseverance and problem solving skills to successfully conduct my experimentation, despite the pandemic-induced challenges.