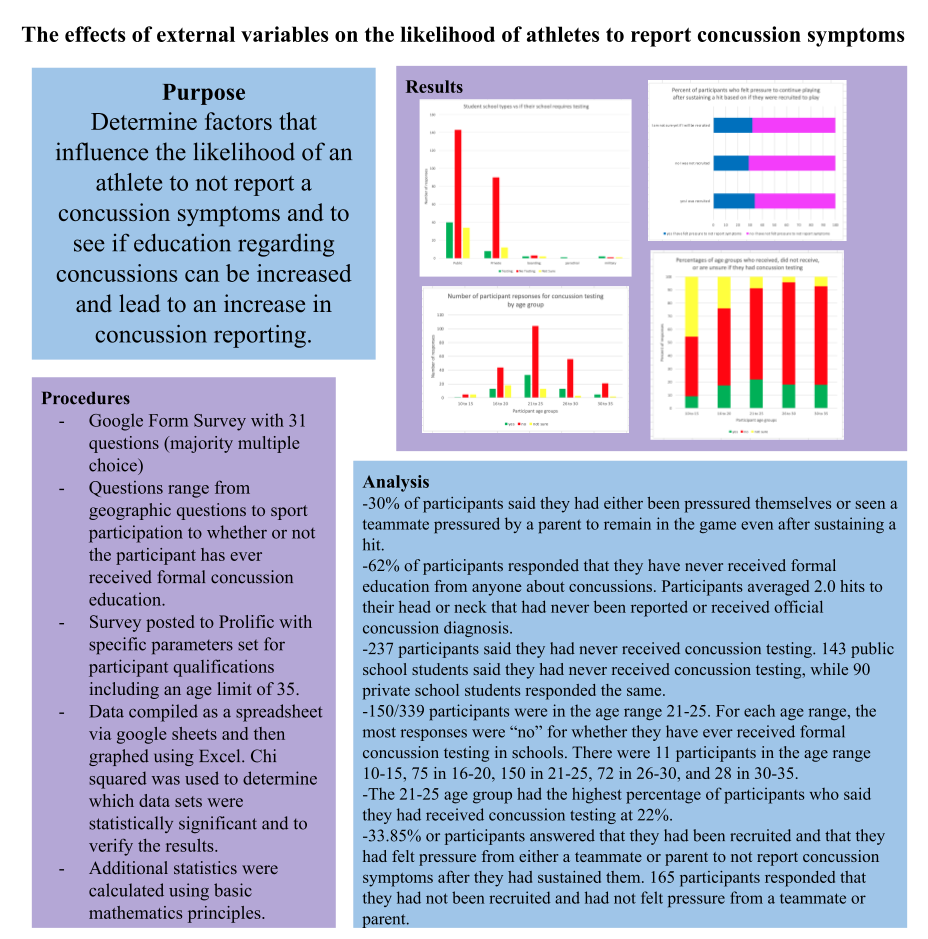 I am not sure if this is requested or not, but here it is just in case:

This study aimed to determine if there are certain groups lacking in concussion education and research which will affect their likelihood of reporting a concussion. There has been a consistent rise in concussions in adolescents, making this project highly relevant. It was hypothesized that participants who played more than one sport at a high level or were being recruited would have a lower chance of reporting a concussion. Additionally, it was hypothesized that greater concussion education would result in greater likelihood to report a concussion hit. An online survey was posted on Prolific for data collection with specific parameters set to filter participants. Results were analyzed and graphed. Analysis found that 30% of participants said they had themselves or seen a teammate pressured by a parent to remain in the game even after sustaining a hit. 62% of participants responded that they have never received formal education from anyone about concussions. Participants averaged 2.0 hits to their head or neck that had never been reported or received official concussion diagnosis. These results show the dire need for more concussion education. It was assumed that older participants were less likely to have received concussion education because there is more national legislation being passed. However, the results do not support this because there is no statistical difference between age groups 21-25 and 26-30. Therefore, it is important to increase concussion education and awareness, and more importantly decrease pressure that athletes feel from coaches, parents, and teammates to continue playing even after sustaining a hit.

To complete this experiment, a survey was conducted as means for data collection. The data for this project was collected from an online Google Form Survey. The survey consisted of 31 questions, most of which are multiple choice. The questions range from geographic questions to sport participation to whether or not the participant has ever received formal concussion education. Name, address, and other personal questions were excluded to preserve anonymity of the participant. This survey was distributed to Princeton High School athletes via science classes and the athletic director for a trial. Feedback was then collected and the survey was revised. It was then posted on Prolific with specific parameters set for participant qualifications. There were 339 total viable survey responses which were used in analysis. The participant age range was 10-35 years old. Data was compiled as a spreadsheet via google sheets and then graphed using Excel. Chi squared was used to determine which data sets were statistically significant and to verify the results. Additional statistics were calculated based on the number of each response compared to the number of participants.

The major objective of my project was to identify external variables that are causing underreporting of concussions. These results can be used to target certain groups in order to increase concussion education and awareness. This would lead to safer reporting environments in the future. Having been a lacrosse player my entire life, I was stunned to learn that girls lacrosse (a non contact sport), had one of the highest rates of concussions. I also was surprised when I talked to my teammates on my travel team and learned that the majority of them either never had taken any baseline concussion testing in school and/or admitted to continuing to play after getting hit in the head. The majority of them attributed this to fear of how parents or coaches would react if they sat out. This sparked my interest in finding out what patterns were associated with these feelings and behaviors.

There is a lack of concussion research in adolescent generations, and it would be dangerous to assume that all findings about the older generations can be directly applied to younger generations. Additionally, studies have not taken into account the legislation that has been passed in the past decade, and they should in order to assess the impact it is having on reporting. My study looks directly at external variables that can be changed and bettered in order to increase the likelihood of athletes to report concussions. Most other studies look at predetermined traits like gender, race, or sport played. My study is geared towards people younger than 30, who are still actively playing sports and whose age group lacks research on concussions and their lasting impacts.

The most challenging part of completing this project was trying to decrease survey bias and make my survey widely accessible. I restricted the age group of participants because I wanted to focus on the younger generation, since there is a large gap in concussion research for this age range. Using Prolific was a good solution, because there are a wide variety of younger people on the platform, enabling me to get survey participants within my age range and many with the athletic history that I needed. I learned that there are always ways to refine your project and survey to make it better.

If I was going to do this project again, I would try another platform for survey distribution. I think if current high school athletes could be the only participants, the results would be slightly more telling.

Yes. In the future, there are many targeted education projects and plans that could be implemented to test if there is an effect on concussion education on the likelihood of athletes to report concussions. The results from my project suggest that more concussion education in schools would positively impact the likelihood of athletes to report concussions. However, some studies have concluded that no amount of education can overpower a negative reporting environment. Therefore, this is one direction I am interested in exploring in a future project.