The Effect Of Counterweight On Trebuchet Launch Distance 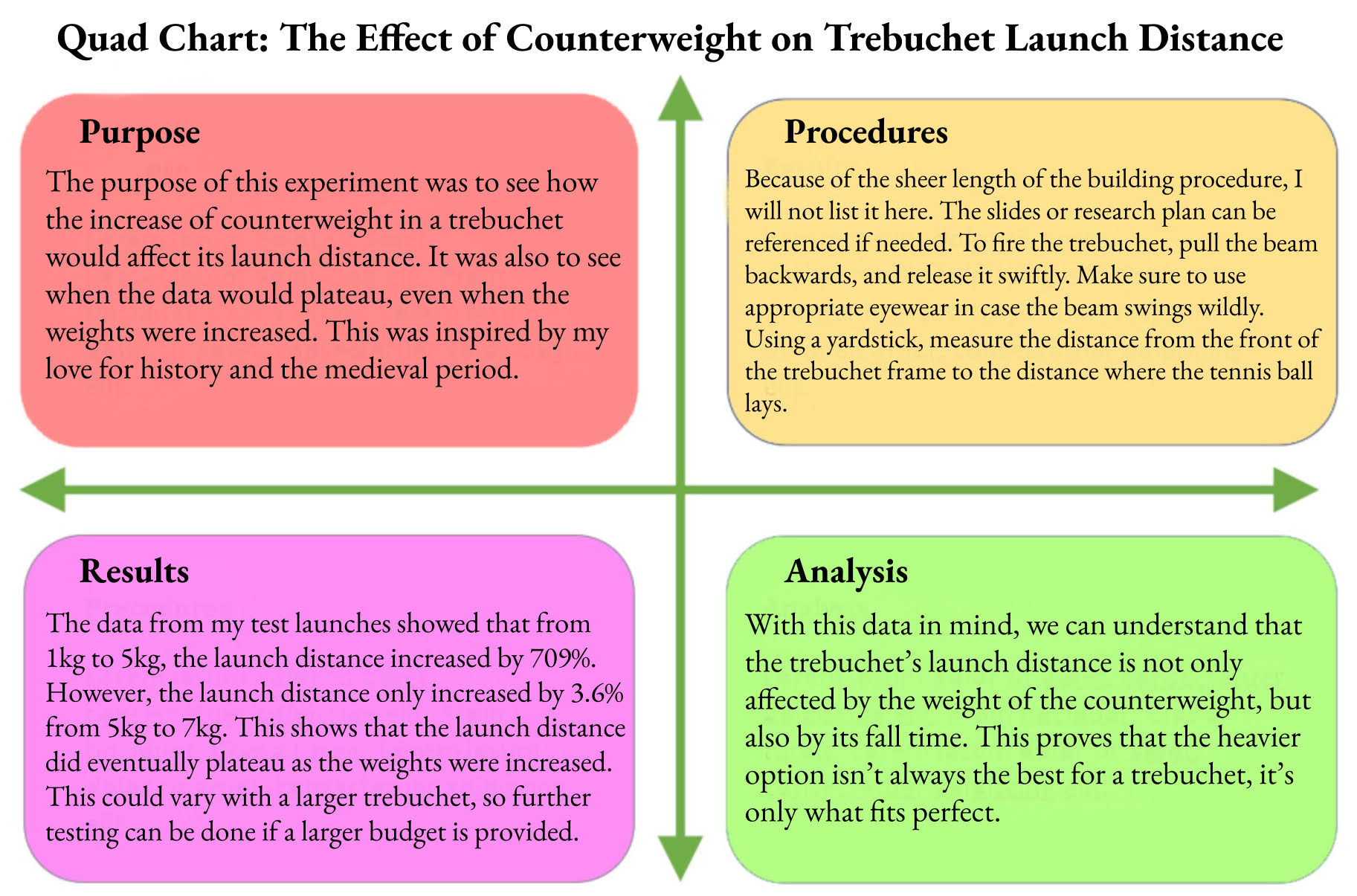 Gamache, Trevor. Trebuchets: The Effects of Mass of the Counterweight... http://tuhsphysics.ttsd.k12.or.us/Research/IB05/GamaHami/fiziks%20web.html#background. Accessed 16 Oct. 2021.

How Does a Crane Work? | Wonderopolis. https://wonderopolis.org/wonder/how-does-a-crane-work#. Accessed 30 Jan. 2022.

“How Do Elevators and Lifts Work?” Explain That Stuff, 18 Nov. 2021, http://www.explainthatstuff.com/how-elevators-work.html.

Counterweight Trebuchets can be broken into five parts. These parts include the frame, axel, beam, counterweight, and sling/launcher, which all work together to maximize the efficiency of the trebuchet.  The frame is used to hold the trebuchet above ground level. This is important because the height of the trebuchet will also determine the air time and distance of the counterweight that falls down (Harvey, “How Did Trebuchets Work?,” Par. 4) The axle is attached to both sides of the frame, which will allow the beam to spin when released. The counterweight is hooked to the shorter side of the beam, meaning the launcher is tied to the longer end of the beam. This helps the projectile go higher in the air and achieve more velocity. (Mozias, “Greek Scientists That Invented The Catapult, Par. 6)

Trebuchets are launched by utilizing the energy of a dropping weight to launch a projectile. It also uses a fast falling speed from the counterweight to achieve high velocity. To increase the speed of the launch, the counterweight must be much heavier than the projectile and sling, as the faster the weight falls, the more strength is pushed through the beam and the more velocity achieved (Trebuchet Physics, Par. 3). Because it is the fall time of the trebuchet that affects the launch distance more, by theory, there should be a cutoff point, where an increase in weight will only yield a slightly further distance. Another important mechanic is the placement of the beam. If the counterweight is shifted too far forward, then the drop speed will have less effect on the velocity, and the beam end of the launcher will be shorter, which also lowers its velocity (Trebuchet Physics, Par. 6). However, if the counterweight is shifted too far back, the weight will not have enough space to maximize fall time, causing the trebuchet to fail.

With this research in mind, we can begin the build procedure. To build the trebuchet, we will need the following materials: 3x 45cm planks, 2x 70cm planks, 2x 75cm planks, and a 100cm plank for the frame and beam. You will also need a 40cm axle, 16x 50mm nails, a ladle, tennis ball, and some basic building tools like a drill and saw. Now we can begin building the frame of the trebuchet. Using 2 70cm planks, and 45cm planks to form a rectangle. The 45cm planks should be under the 2 70cm planks. Under the 2 70cm planks, nail another 45cm plank under it at the central point of the 70cm planks. Nail these planks together using two diagonal nails per side. After that, attach 2 75cm planks at a 90 degree angle to the rectangular frame in the first step. Use two holders and 4 nails on either side of plank to hold it up. With the frame completely finished, we can now attach both the axle and the beam. 10cm from the top of both upright planks, drill a 2cm by 2cm hole. Fit a 40cm long axle through the previously drilled hole. Now, we will attach the beam. Take a 100cm long plank, and drill a 2cm by 2cm hole 25cm from the one side. On the shorter side of the hole, hammer in a hook. On the other side, use rubber bands to tie a launcher on. Instead of using a sling, we are using a launcher as it is far more consistent with the lighter weights and smaller design. Any object that has a scoop like shape can be used. Continue wrapping rubber bands around the beam and ladle until it is fit snugly and doesn’t wiggle during launch. Attach the beam to the frame of the trebuchet using the axle. Lastly, we will add the weights. Using a smooth piece of rope, attach and tie the rope to a cardboard box. Hang it on the hook hammered in the previous step. Place your weights into the box. Make sure to hold down the beam so it doesn’t fly upwards. To launch it, you can tie a piece of string to the bottom of the beam, and cut the string to release the trebuchet.

To launch the trebuchet, pull the beam down and place the tennis ball in the ladle. Simply remove your hand and let the weights fall down. Don't try to jump away or remover your hand quickly, as it causes the beam to twist to the side or launch in an awkward position. Using goggles or some sort of protective facewear is recommended, as the beam can swing uncontrollably sometimes, or in rare situations the ball launches backwards.

The major objective was to see why counterweight trebuchets eventually replaced catapults, and why some trebuchets were able to function to a higher level compared to others. To test this, I built a smaller version of a trebuchet, and used different counterweights to test which would maximize the trebuchet's efficiency.

The goal of my experiment was to figure out how a trebuchet truly functioned, and why some worked better then others. This was inspired by my love for history; mainly the medieval times and how trebuchets could turn the tides of wars and why some trebuchets functioned much better compared to others.

In this experiment, my goal was to test the hypothesis of whether increasing the counterweight of a trebuchet would increase it's launch distance.

To complete my project, I had to build and experiment on a trebuchet. I had to figure out how to attatch heavier counterweights as duct tape and other materials weren't strong enough to keep it attached, so I had to be innovative. I used a slick piece of string tied around a cardbord box which was then attached to a hook on the trebuchet. Yet the hardest challenge was fixing the sling. I originally used a sling made of duct tape, but it launched inconsistently. I troubleshooted this and used a face mask, as it made the sling lighter. This improved its consistency, but did not fully fix the problem. In the end, it seemed apparent that using a sling with a smaller trebuchet would not function to its best ability, so I adopted a makeshift catapult head utilizing a ladle.

Despite tests on trebuchets being around for years, my limited budget caused my trebuchet to be different compared to the other build's you'll see online. Instead of using heavy circular weight plates, I had to use small 5-10 pound liftable weights. Because of the small size and lighter weights, I also couldn't use a sling, and rather had to use a catapult style head. However, this design was much more simplistic, and required less set up.

This project was my first time cutting wood, and using a drill. This made it tough, as the putting together and cutting of the wooden planks required both of those skills. However, after many failed attempts, I eventually got the hang of it and was able to complete the build process.

When looking at other experiments utilizing trebuchets, many experiments seem to revolve around the angle the sling is released. Because of the size of my trebuchet, a sling didn't function well with its inconsistency, so instead I used a catapult style launcher. This meant that the launch angle would be similar every launch, as the catapult head was locked in place. Because of this, my experiment was centered around the change of counterweight itself, and not the release angle.

The most challenging part of completing my project was getting the sling to work. I had to experiment with many different materials, trying to find how the weight both positively and negatively affected the consistency of a successful launch.

There were two main problems with the trebuchet. The first problem was the inconsistency of the sling. I was able to solve this by replacing it with a ladle to launch the projectile. The second issue was the attachment of the counterweights. I was unable to directly attach the weights directly, which was my original plan, as the hooked weights proved far too light to launch the machine. Therefore, I used a carboard box and smooth string to hold the weight.

I learned that simplicity is key. While the sling was much more conventional and advanced, it had many variables that made it hard to troubleshoot. Because of this, replacing it with a simpler design such as the ladle worked much better.

Next time, I would try to work with a larger budget and build a larger trebuchet. I would use heavier plate weights and attach them to the beam using a large axle. Another important thing I would do is add a stopper, so as the beam swings forward, the ball would release before the beam faces downward, that way the projectile has a higher arc.

Because I could build my trebuchet at home, and then tested it in an open field, COVID-19 did not affect my experiment. Nonetheless, normally at my school, the curriculum fair projects would be presented in person. However because of COVID-19, we had to record our presentation and show it online. Because of this, I was able to show my peers and teachers my trebuchet in action.