Does Changing The Type of Liquid Affect How Fast An Ice Cube Will Melt? 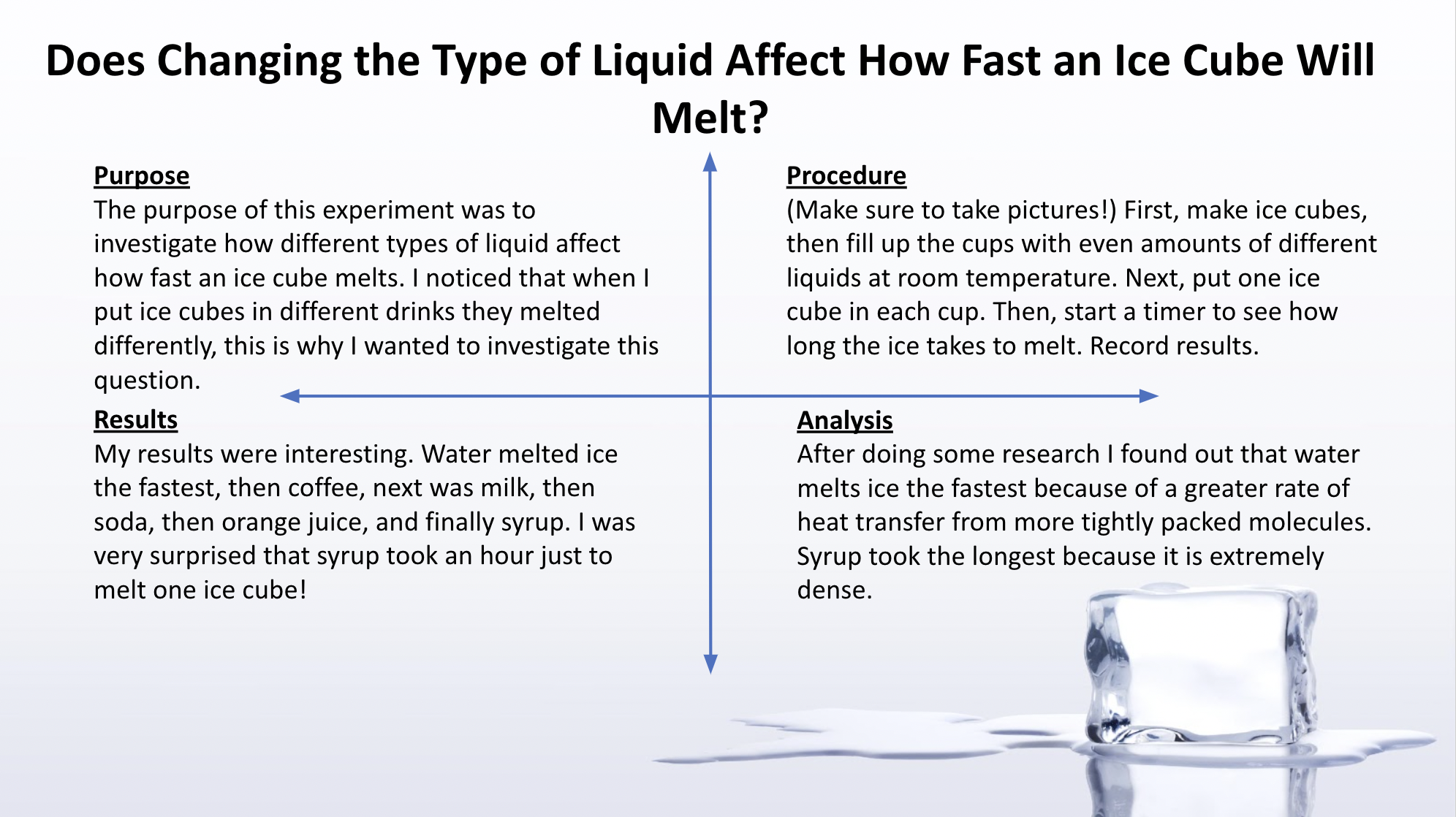 1. The major objective of my project was to learn from this experience and from the science fair since I have never entered a science fair or conducted and written up an experiment before. I wanted to win the science fair and my plan was to work really hard and try to come up with the best procedure and experiment that I could.

2. I was trying to test my hypothesis and investigate a question. The question I was investigating was, “Does Changing the Type of Liquid Affect How Fast an Ice Cube Will Melt?” The hypothesis I was testing was, “Ice cubes will melt at different speeds in different liquids, with high sodium liquids melting ice the fastest.”

3. A major task I had to perform was dropping all of the ice cubes in the cups as fast as I could. I solved the problem by putting all of the cups right next to each other so there was a very small time difference. I was the only one who conducted this experiment.

4.  This was my first time writing up and conducting an experiment and the science fair was new to me too.

5. My question was different from other experiments and I thought of this research question myself because I was just trying to write a good experiment and procedure and learn from the science fair and the results that I got.

6.  I have looked at lots of different projects and research questions other people have done in the past. I am not completely sure that I am the only one who has tested this question because I can’t see all of the projects but, I think my procedure for conducting my experiment was unique.

7.   One of the biggest challenges I had to do in my project was dropping the ice cubes in the cups at the same time. I had to drop all of the ice cubes in the cups as fast as I could. I solved the problem by putting all of the cups right next to each other so there was a very small time difference. I was the only one who conducted this experiment. Another problem I encountered was that I had no way of telling if the liquids reached room temperature because I didn’t include a thermometer anywhere in my steps or equipment list. I had to wait a whole day before I could start my experiment to make sure all of the liquids were exactly at room temperature.

8.  I learned that I should be more careful and find the flaws in my procedure before I started my experiment. I also learned that there is most likely a solution or a way around every problem.

9. I think that I wrote a really good procedure and conducted my experiment really well but the next time I would try to find the flaws so there aren’t any when I actually conduct my experiment.

10. It didn’t give me any ideas for other projects but I already had an idea in mind to do another experiment about soccer because I am really into soccer and I have been playing it for 8 years.

11. COVID-19 didn’t affect my project at all, I didn’t do my project with or on humans or animals so I wasn’t at risk.