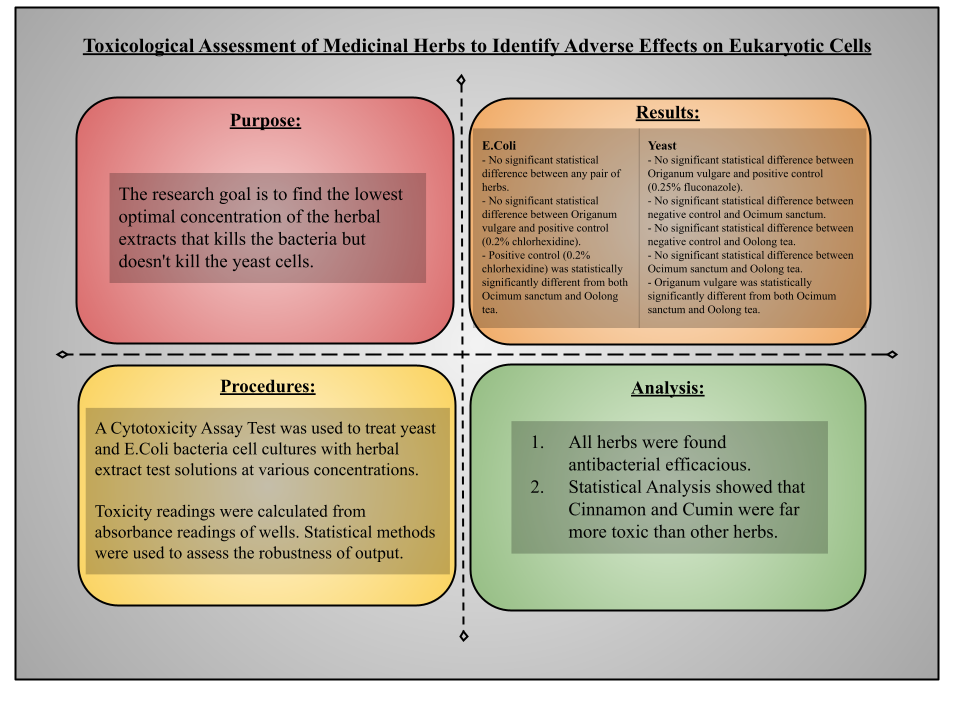 The maceration or cold extraction method will be used to prepare herbal extracts. Herbs will be washed in clear water and dried until they will be adequately dry to be ground. Dried leaves will be powdered separately in an electric grinder until a homogenous powder is obtained. Herbal powder purchased from vendors will also be further ground in an electric grinder. A total of 100 g of the finely powdered herb will be macerated with 100% ethanol for 3 days with frequent agitation. This process is intended to soften and break the plant’s cell wall to release the soluble phytochemicals. This alcoholic decoction will be subjected to filtration with Whatman #1 filter paper to obtain a clear filtrate. This filtrate thus obtained will be reduced at a low temperature of less than 60°F to obtain a solid residue of herbal extract.

The specific research goal of this project was to find toxicity of medicinal herbs (Ocimum sanctum, oolong tea, and Origanum vulgare), having known efficacy against bacterial microorganisms, to verify the potential pharmacological effects on eukaryotic cells. In simple words, the research goal is to find the lowest concentration of the herbal extracts that kills the bacteria but doesn't kill the yeast cells.

Two years ago, my grandma was passing out occasionally, but her biomarkers showed no sign of concern. So, in my junior year, when it was time to decide on an independent research project, I didn’t have to think twice. I set out to test three herbs my grandma was using in her cooking for a toxicological assessment. The damage had already been done. She was using the herbs way beyond safe dosage as per my analysis of dead cells in the cytotoxicity assays research

Yes, I was trying to test a hypothesis.

Despite the large number of people using alternative medicine treatments including medicinal herbs, relatively little scientific data are available to demonstrate convincingly whether or not a particular treatment is safe, beneficial, helpful, or leads to a positive outcome (Obidike, 2013).  Depending on toxicological assessment of medicinal herbs, It would be far easier and practical to introduce medicinal herbs for the treatment of short term infections or preventive care than for the longer term cures in medicine where extensive research and in vivo clinical trials are needed before any application of drugs commercially. This research at hand is a focussed effort in the direction of classifying cytotoxicity data of widely used medicinal herbs, having high efficacy against bacterial infections, which can be put to immediate use for further in vivo testing.
Based on results of in vitro experiments, many available studies concluded antibacterial and antifungal efficacy of medicinal herbs for treating various health problems but relatively little scientific data are available to demonstrate convincingly their mechanism of actions, toxicity and resulting side effects on humans, which warrants serious research in this area to generate the required evidence (Cruz, 2017).
This project would significantly help in filling research gaps between traditional knowledge and proven evidence of herbal safety. There is a dearth of studies of highly efficacious medicinal herbs that classified toxicity data which can be immediately used before conducting expensive in vivo clinical trials.  There is a significant gap between traditional knowledge and trials investigating medical plants. Additionally, There are gaps in the quality control of herbal medicine products (Pelkonen, 2014).
This research effort is different from some other previous research attempts as it is focussed on some widely used medicinal herbs such as Ocimum sanctum, oolong tea, and Origanum vulgare, which were found to be as effective as commercially available synthetic drugs against most common infections (Buggapati, 2016).

This research project was a never ending endeavour. I had designed it so well by spending two months over summer with meticulously including all the details. In a test of my nerves, I had to redesign my experiment multiple times due to shortened lab hours, lack of equipment,  and contamination of compounds.  I had to figure out an alternative to testing mammalian cells in addition to switching from MTT to MTS based cytotoxity assay due to material safety data concerns in the BSL-1 (Biological Safety Levels) grade high school lab. I sourced used equipment ( ex. Microplate reader) from online scientific equipment vendors.

I learned that doing research is hard. It requires tremendous patience and determination. Pressed for time, my colleagues switched to data research. I hadn’t run a single trial by the end of the academic year, but no setback could make me give up. Finally, my endurance paid off, and I was able to get four continuous weeks of lab time to conclude my experiment in the summer.

I used the maceration or cold extraction method to prepare herbal extracts which were very time-consuming. If I was going to do this project again, I would have used the Ultrasound-assisted extraction method due to its several advantages such as low energy consumption, less extraction time, less active compound damage, and high extraction yields.

Yes. The widespread use of herbs warrants a study in genotoxicity assessment (using Gene Mutation test in bacteria) to determine any damage to the genetic information within a cell causing mutations that could lead to cancer development.

I tried reaching out to various university labs in the area but during the Covid-19 pandemic time, university labs were out of reach as no research lab was entertaining high school students in the area. Due to hybrid learning at high school, research hours were cut drastically and most of us doing research were advised to switch to non-wet lab-based research. At this point, I had to cut short the scope of my experiment by excluding phytochemical analysis from my research. As part of my original research, I really wanted to know the bioactive compounds and their dosage responsible for robust antimicrobial activity against some of the bacteria and fungus microbes I studied during the literature review of existing studies.