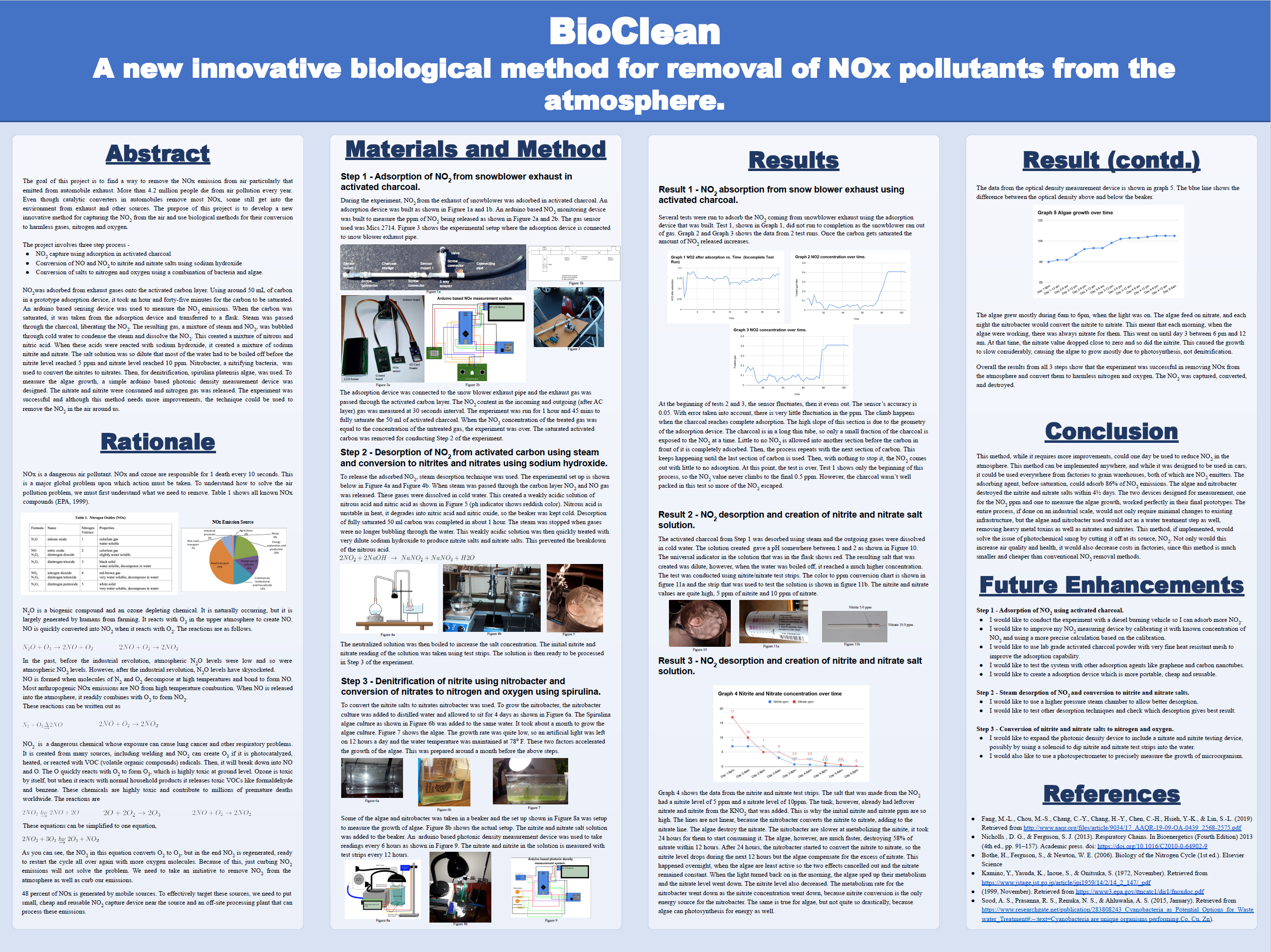 The goal of this project is to find a way to remove the NOx emission from air particularly that emitted from automobile exhaust. More than 4.2 million people die from air pollution every year. Most of these deaths come from ground level ozone and NO2. In the presence of sunlight, NO2 catalyzes the formation of ozone from oxygen. NO2 and ozone can cause asthma and other respiratory problems. Currently, the available methods for NO2 removal are catalytic converters for automobiles or massive scrubbing devices for industrial processes. Even though catalytic converters remove most NOx some still get into the environment from automobile exhaust and other sources. Can we capture the NOx being released into the air and convert them to natural, harmless gases? The purpose of this project is to develop a new innovative method for capturing the NO2 from the air and use biological methods for conversion to nitrogen.

The project consists of three parts, a method for capturing the NO2 from the atmosphere, converting it to nitrite and nitrate salts and a method for converting the salts to nitrogen gas using bacteria and algae. To store the NO2, it was adsorbed onto activated carbon. Using around 50mL of carbon in a prototype adsorption device, it took an hour and forty-five minutes for the carbon to be saturated. An arduino based sensing device was used to measure the NO2 emission. When the carbon was saturated, it was taken from the adsorption device and transferred to a flask. Steam was passed through the flask, liberating the NO2. The steam and NO2 were bubbled through cold water to condense the steam and dissolve the NO2. This creates a mixture of nitrous and nitric acid. When these acids were reacted with sodium hydroxide, it created a mixture of sodium nitrite and nitrate. The acid, and consequently the salt, are so dilute that most of the water had to be boiled off before the nitrite level reached 0.5 ppm. However, if done with more carbon on a larger scale, this could create more nitrite and nitrate salts. These salts can disrupt ecosystems so they need to be destroyed. Nitrifying bacteria like nitrobacter can convert nitrites to nitrates. Denitrifying organisms like cyanobacteria can then convert the nitrate to nitrogen and oxygen gas. For the denitrifying organisms, spirulina algae was used. To measure the algae growth, a simple arduino based photospectrometer was designed. The experiment was successful and although this method needs more tests, it could be used to remove NO2 from the atmosphere.

More than 4.2 million people die from air pollution every year. Most of these deaths come from NO2 and ground level ozone. In the presence of sunlight, NO2 catalyzes the formation of ozone from oxygen. NO2 and ozone can cause asthma and other respiratory problems. Currently, the only available methods for NO2 removal are catalytic converters in automobiles or massive scrubbing devices in industrial processes. Even though catalytic converters remove most NOx some still get into the environment from automobile exhaust and other sources. Can we capture the NOx being released into the air and convert them to natural, harmless gases? The purpose of this project is to develop a new innovative method for capturing the NO2 from the air and use biological methods for conversion to nitrogen.

NOx is a dangerous air pollutant. NOx and ozone are responsible for 1 death every 10 seconds. This is a major global problem upon which action must be taken. To understand how to solve the air pollution problem, we must first understand what we need to remove. Table 1 shows all known NOx compounds (EPA, 1999). 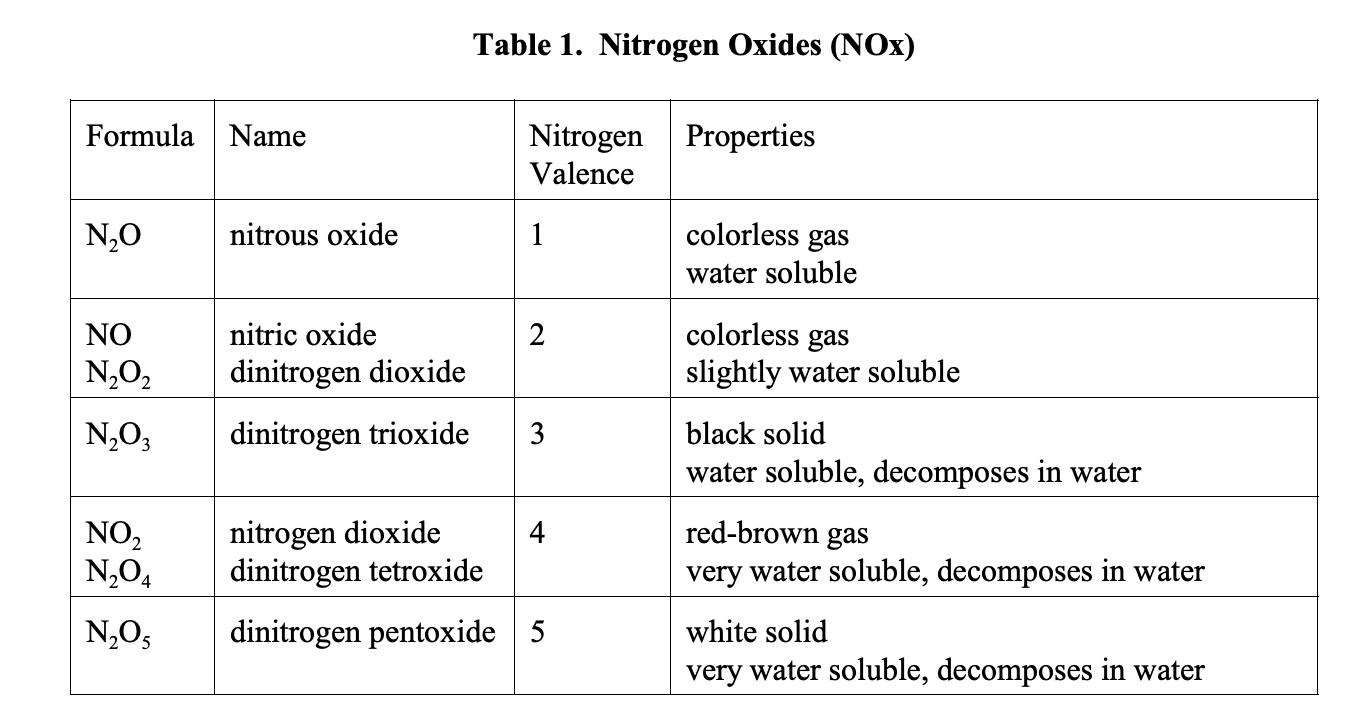 N2O is a biogenic compound and an ozone depleting chemical. It is naturally occurring, but it is largely generated by humans from farming. It reacts with O3 in the upper atmosphere to create NO. NO is quickly converted into NO2 when it reacts with O2. The reactions are as follows.

NO is formed when molecules of N2 and O2 decompose at high temperatures and bond to form NO. Most anthropogenic NOx emissions are NO from high temperature combustion. When NO is released into the atmosphere, it readily combines with O2 to form NO2. These reactions can be written out as so.

NO2 is a dangerous chemical whose exposure can cause lung cancer and other respiratory problems. It is created from many sources, including welding and NO2 can create O3 if it is photocatalyzed, heated, or reacted with VOC (volatile organic compounds) radicals. Then, it will break down into NO and O. The O quickly reacts with O2 to form O3, which is highly toxic at ground level. Ozone is toxic by itself, but when it reacts with normal household products it releases toxic VOCs like formaldehyde and benzene. These chemicals are highly toxic and contribute to millions of premature deaths worldwide.

These equations can be simplified to one equation,

As you can see, the NO2 in this equation converts O2 to O3, but in the end NO2 is regenerated, ready to restart the cycle all over again with more oxygen molecules. Because of this, just curbing NO2 emissions will not solve the problem. NO2 has a long lifespan and will continue to create ozone from oxygen for its entire life. We need to take an initiative to remove NO2 from the atmosphere as well as curb our emissions.

The NO2 will be captured from the atmosphere using activated carbon. Then it will be desorped using one of two methods, passing steam through it, or refluxing it. The experiment will determine which of these methods are better. This will create a mixture of nitric and nitrous acid. The temperature and other external conditions such as UV light concentration can all contribute to the type of acid and whether or not small amounts of nitric oxide is produced. After that, the acids will be reacted with sodium hydroxide. This will create nitrite and nitrate salts. These will be fed to a mixture of bacteria (nitrobacter) and algae (Spirulina). These will destroy the salts and convert them to nitrogen gas. 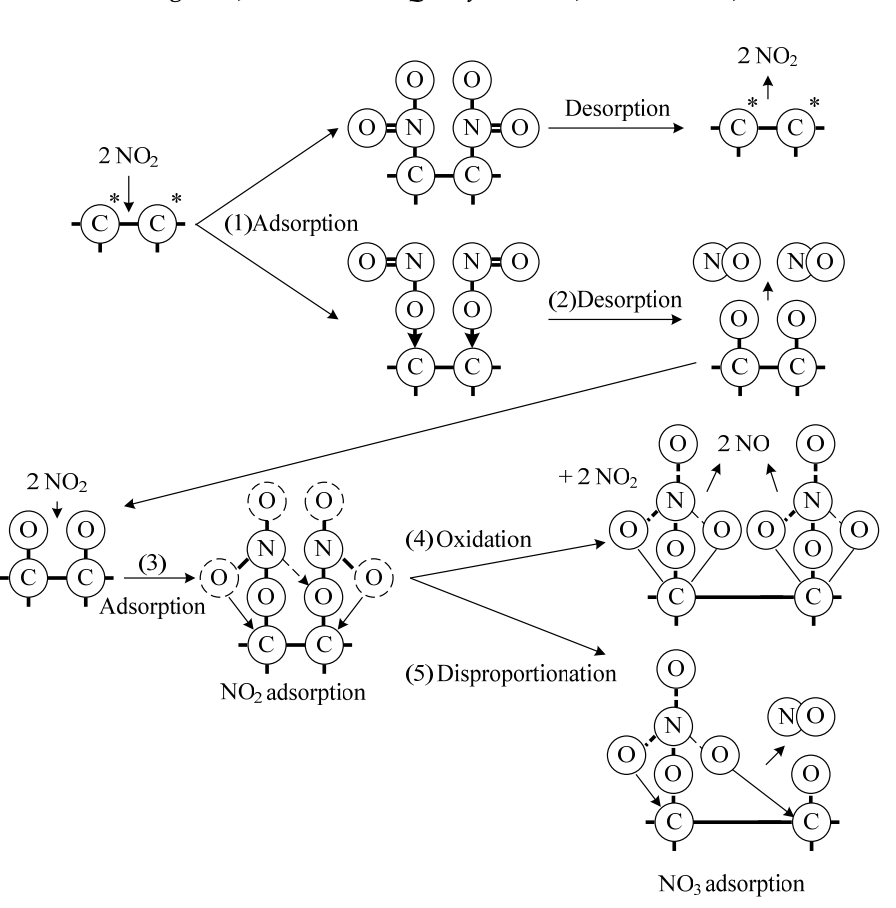 As the NO2 adsorbs, it can form many different bonds with the carbon, and in some cases oxidizing the carbon. While most of the NO2 is adsorbed, some of it can desorp spontaneously as NO2 and NO. This means that the process is not completely efficient, and is also why the carbon must be stored in a stoppered container to prevent the gas from escaping.

To desorp the NO2, most papers recommend the use of a flow reactor. I do not have access to a flow reactor. I will try to reflux the charcoal in water to see if I can add enough energy to break the carbon-NO2 bonds. In this case, the carbon will be submerged in water so any NO2 gas that is liberated will dissolve into the water. The other method is steam desorption. However, this method has never been tried with NO2, only with sulfur based products (Kamino et al., 1972).

The acidic solution will be treated with sodium hydroxide. This process creates nitrites as waste. Nitrobacter oxidizes the nitrite ion into the nitrate ion (Ferguson and Nicholls, 2013). To do this, it first reacts water with the ion. The oxygen is transferred to the nitrite ion, converting it to nitrate. This reaction leaves 2 hydrogen ions and two electrons. These ions can then be used by the cell's mitochondria to produce energy. The oxidation reaction is as follows,

The hydrogen plus ions and the two electrons can be reacted with oxygen gas from the atmosphere to produce water and energy. The reaction is as follows,

of energy per mole of nitrite.

As well as using nitrite as an energy source, nitrobacter is also a carbon sequestering bacteria, taking in carbon dioxide to fulfill its carbon needs. This makes it an optimal choice for nitrite removal.

To destroy the nitrate, cyanobacteria (Spirulina) will be used to convert it to N2 gas (Bothe et al., 2007). The equation can be written out as follows.

This reaction has four parts to it. First, the nitrate is converted to nitrite. This causes the combination of electrons, hydrogen cations, and the liberated oxygen to produce water. This charge difference allows the cell's mitochondria to synthesize ATP. Then, the nitrite is converted to nitric oxide. This liberates still more oxygen, creating water and allowing ATP synthesis. After that, two molecules of NO are converted to one molecule of N2O, nitrous oxide. This liberates yet another oxygen which the cell uses in the same fashion. The final step is taking the oxygen from the nitrous oxide, converting it to nitrogen gas and using the oxygen for energy. This process can release small amounts of NO and N2O, however, it is a very small amount and both NO and N2O can be reused by other algae to produce N2 and energy.

The purpose of this project is to develop a new innovative method for NO2 removal from the atmosphere using biological processes.

The process will have three phases

Part 2: Desorption and conversion to nitrite and nitrate.

Here are the risk associated with the project -