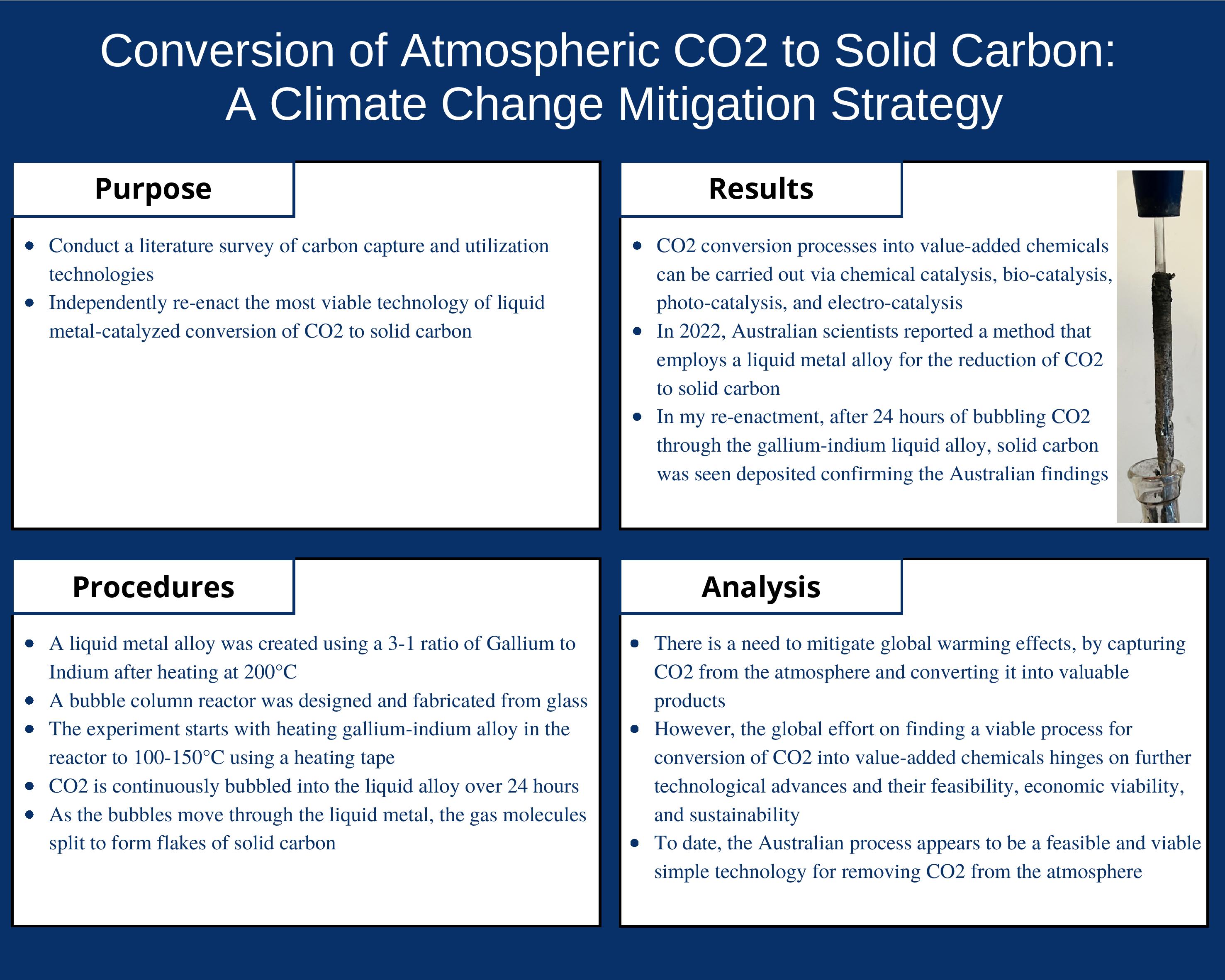 After conducting a literature search for a viable method to utilize carbon dioxide,  I selected a research paper published in January 2022 that appeared to be simple in approach and yet provided a viable solution. I have tried to understand the paper to identify all the materials and methods needed to conduct the experiment. It required a bubble column reactor that could be kept at temperatures of 150-200℃, which I designed and found a place to get it fabricated. I also needed to think of alternatives to other items that weren’t readily available. Finally, I had to build an experimental setup where the experiment would be safely conducted.

The major objective of my project was to independently reproduce an experiment conducted by Australian scientists to catalytically reduce carbon dioxide into solid carbon through the use of liquid metal gallium-indium eutectic. My plan to achieve it was to understand the papers to identify all the materials and methods needed to conduct the experiment. This required me to design a bubble column reactor that could be kept at temperatures of 150-200℃ and to find a place where I could get it fabricated. I also needed to think of alternatives to other items that weren’t readily available. Finally, I had to build an experimental setup where the experiment would be safely conducted.

I am deeply concerned about the continuing and intensifying problem of global warming. I have been researching potential solutions for the mitigation of global warming that I could work on for a research-based class that I have been accepted to in my high school. I realized that besides reducing the addition of CO2 into the atmosphere, researchers are working on Carbon Capture and Utilization technologies where the existing CO2 in the atmosphere can be removed or recycled. In January 2022, after looking through scores of research papers on catalytic conversion of CO2 to organic chemicals,  I came across a publication from Australian researchers that reported the conversion of captured CO2 into solid carbon achievable through a very simple process. This appeared to be a viable approach for CO2 utilization.

I became interested in independently reproducing the results of the Australian researchers as a first step to further researching liquid metal catalytic conversion of CO2 to carbon as a solution for global warming.

I had to understand the science and technology behind the use of liquid metals as a catalyst for converting carbon compounds to solid carbon. To get solid carbon from CO2, I had to get metal alloy prepared that would stay liquid at room temperature

I had to get a glass bubble column reactor designed and built at the Princeton University Glass shop. I improvised the process of keeping the reactor at elevated temperature by using a heating tape. Also, I got the carbon dioxide cylinder and regulator from an aquarium shop.

My project is reproducing results from a 2022 paper that demonstrated a novel and unique way to convert CO2 to solid carbon. It is a simple approach that could be scaled up as a provisional solution for the effective utilization of greenhouse gasses.

I could not find a bubble column reactor that I could purchase off the shelf. To solve this problem, I found a local glass shop and after discussing with the expert there was able to design and get fabricated a reactor with an exhaust port and a separate tapered inlet tube to allow a stopper to fit. Initially, I was discouraged as I did not see much solid carbon being produced. I had to increase the temperature by about 50-100℃ and also increase the CO2 flow rate significantly and waited for a long time before I could see clear solid carbon formation.

I had made the eutectic alloy by combining Gallium and Indium in a 3:1 mixture and melting them together. To get a perfect ratio was difficult as Gallium tended to stick to the tube. I later realized that I could have directly procured the eutectic compound from commercial sources.

I gleaned the literature to find that a very similar process could be used to convert the other greenhouse gas methane to solid carbon and hydrogen.

There were some delays in getting supplies as companies were back ordered on those items.